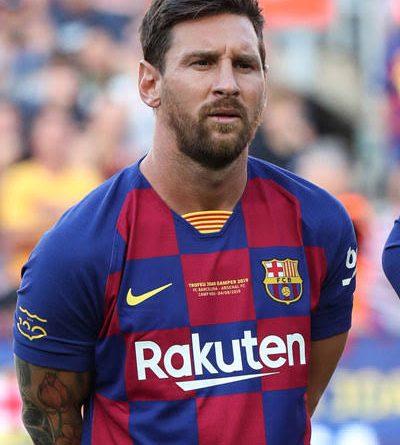 Lionel Messi’s 20-year career with Barcelona ended on Thursday after the Argentine superstar failed to reach an agreement on a new deal with the club.

No doubt, Leo Messi left Barcelona as a legend. This is as the Argentine star holds all of the main records in FC Barcelona’s history after equaling Xavi as the footballer with the most games played.

Here are the top 45 records broken by the Argentine as certified by Barcelona on their website.

• The only player in history to win the Ballon d’Or, FIFA World Player, Pichichi Trophy and Golden Boot in the same season. It happened in the 2009/10 season.

• All-time top scorer in a calendar year. He scored 91 official goals in 2012. With Barça, 84 (59 in the League, 13 in the Champions League, 5 in the Copa del Rey and 2 in the Super Cup) and with the Argentine national team, 12. He also managed another 5 in friendlies with Barça, which would see the figure rise to a total of 96 goals.

• Record of international goals in one year. He scored 25 goals in 2012 (13 in the Champions League and 12 with the Argentine national team), and shares the record with Vivian John Woodward, who scored 25 in 1909.

• Top scorer in a European League since the establishment of the Golden Shoe trophy in the 1966/67 season. Set the record by scoring 50 goals in La Liga 2011/12.

• Player with the most domestic and international titles. He has 35 since 2002. There are 10 leagues, 8 Spanish Super Cups, 7 Copas del Rey, 4 Champions Leagues, 3 Club World Cups and 3 European Super Cups.

• Top scorer in international competitions. He has 128 goals: 120 in the Champions League, 3 in the European Super Cup and 5 in the Club World Cup.

• Top scorer at home in a season in official matches: Leo Messi scored 46 goals in all competitions at the Camp Nou during the 2011/12 season.

• The only player who has been both top scorer and top assist provider in the same season. He scored 50 goals and supplied 15 assists (tied with Real Madrid player Özil) in the 2011/12 league season. He also did it in the 2017/18 league campaign (34 goals and 12 assists, matched in goals with Luis Suárez and in assists with Pablo Fornals, from Villarreal) and in the 2019/29 league season (25 goals and 21 assists).

• Player with most hat-tricks, four-goal and five-goal contributions in official competition. March 22, 2021 sees him with 48 (41 hat-tricks, 6 four-goal hauls and one five-goal game).

• League season with all opponents scored against. He scored against all the teams in the 2012/13 LaLiga campaign, equaling the mark of Real Madrid’s Cristiano Ronaldo in 2011/12.

• Player with most appearances for Argentinian national side. As of 29 June he has played 148 times for Argentina, beating Javier Mascherano’s record of 147.

• Top scorer in the European Cup / Champions League. He has 120 goals, almost 100 more than all his main pursuers.

• Player with the most goals scored in an edition of the Champions League. Leo Messi scored 14 goals in the 2011/12 Champions League. The record for the competition is held by Cristiano Ronaldo, who made it 17 in 2013/14.