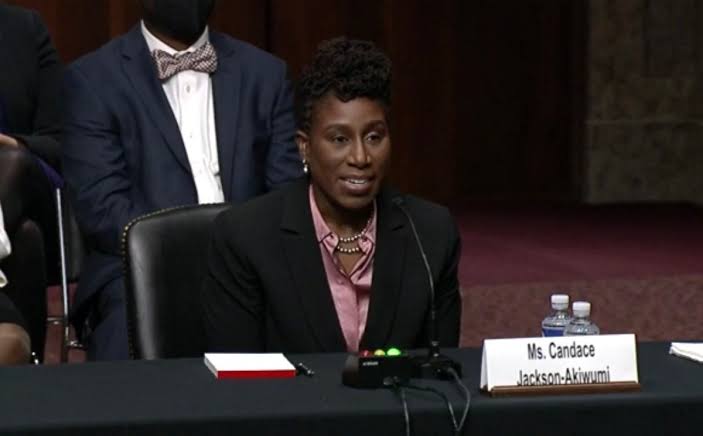 President Joe Biden said he will nominate a Black woman to the US Supreme Court for the first time in history, filling the vacancy left by retiring Justice Stephen Breyer.

Candace Jackson-Akiwumi has been noted as one of the most likely potential nominees for a Supreme Court appointment under President Joe Biden.

Jackson-Akiwumi is married to her husband Eric Akiwumi, who is a Nigerian.

“I’ve made no decision except (the) person I will nominate will be someone with extraordinary qualifications, character, experience and integrity,” Biden said in an address from the White House.

“And that person will be the first Black woman ever nominated to the United States Supreme Court.”

Biden, speaking at a podium alongside Breyer, also indicated that he would seek a speedy nomination process, promising to name his candidate by the end of February.

The exit of Breyer, who is 83, gives Biden a likely smooth opportunity to name a replacement to the lifelong seat on the Supreme Court while his Democratic Party retains control of the Senate.

The Supreme Court is currently split between six conservatives and three liberals. Biden will now be able to nominate another liberal-leaning jurist to the court, maintaining the balance.

Breyer had been under pressure from liberals to leave in time for Biden to get his nominee through the Senate before November’s midterm elections, when Republicans are in a strong position to win majorities in Congress and would then control the approval process.

As president, Donald Trump had the rare opportunity to put no fewer than three new justices on the court, fundamentally shifting its political leaning for potentially years to come.

Biden’s one pick so far will have nowhere near that level of impact. However, the Democrat will be glad of a successful confirmation process, delivering a much needed morale boost to his party ahead of the midterms.

As an immediate reminder of the tensions that Supreme Court confirmations often provoke, Republican senior Senator Mitch McConnell warned Biden “not to outsource this important decision to the radical left.”

“To the degree that President Biden received a mandate, it was to govern from the middle,” McConnell said.

In his resignation letter, published Thursday, Breyer underlined the coordinated plan to ensure that the succession moves with minimal upheaval, confirming that he will stay on the court through the packed current term — but not before his replacement is ready.

“I intend this decision to take effect when the court rises for the summer recess this year (typically late June or early July) assuming that by then my successor has been nominated and confirmed,” he wrote.

Biden promised to put an African-American woman on the court back when he was campaigning for the Democratic presidential nomination.

The vow was part of his vital outreach to the Black community, which became a crucial component in ultimately defeating a crowded field of Democratic rivals and then unseating Trump.

Biden put the first Black and Asian woman, Kamala Harris, on the ticket as his vice president, and since taking office has also pushed hard to place more women and ethnic minorities as senior judges.

Biden said that in the search for Breyer’s replacement, he would be asking Harris to help, describing her as “an exceptional lawyer” and noting she was a former member of the Senate judiciary committee — a body he himself led while serving as a senator.

Among the leading candidates to replace Breyer are Ketanji Brown Jackson, a US Court of Appeals judge, and Leondra Kruger of the California Supreme Court.

Of the 115 justices who served on the Supreme Court, only five have been women, including three today — Sonia Sotomayor, Elena Kagan and Amy Coney Barrett. Only two have been Black men, one of whom is current Justice Clarence Thomas.

Breyer is the oldest justice on the court and was nominated in 1994 by then Democratic president Bill Clinton.

Praising Breyer, Biden highlighted his bipartisan spirit, saying he “patiently sought common ground” and was “a model public servant in a time of great division in this country.”