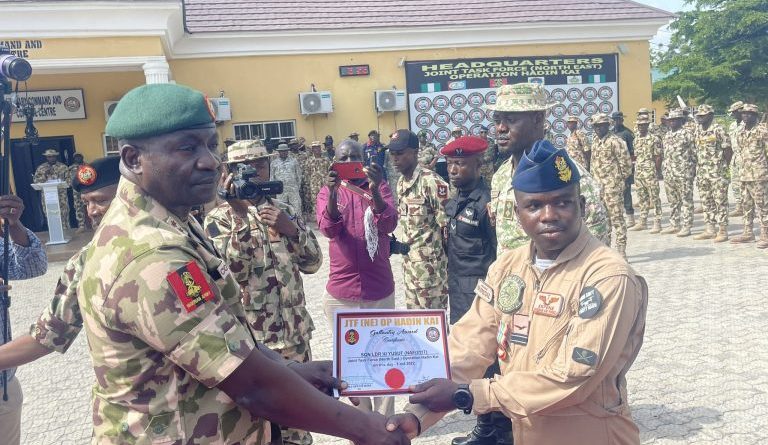 The Nigerian Army has honoured five officers of Operation Hadin Kai JTF, who distinguished themselves and demonstrated exceptional bravery, dedication, and commitment in the fight against Boko Haram insurgents.

According to Zagazola Media Network, the soldiers were honored with the Theartre Commander Commendation Award.

Among the soldiers was Lt. Col I.A Manga, who was said to have led several anti-insurgency operations in the northern regions including the Sambisa forest. He was said to be instrumental in the capture of several terrorists and the recovery of ammunition.

According to General Musa, among the 80 awardees are personnel from the Nigerian Air Force, Navy, Police, Department of State Service, Nigerian Customs Service, the Correctional Service, Nigerian Immigration Service, Civil Defense and the Civilian JTF.

Other recipients include; journalists who have demonstrated critical roles in their reportage towards the fight against terrorism in the region.

Zazangola reported that while presenting the medals and awards to the recipient, Musa charged them to continue to display their professionalism to end the war while the Nigerian Army would continue to cater adequately for their welfare.

Musa said, “On behalf of President Muhammadu Buhari, I wish to congratulate everyone for us recording another milestone which is the 62nd anniversary of our Independence and earning the medal of honour for our participation and gallantry.

“Operation Hadin Kai is a joint Operation which is designed for every one of us to play a role in ending all forms of insecurity in the North-East. It consists military, para-military, government and non-governmental organisations, the civil populace, and law-abiding citizens.

“The Operation was established in order to restore law and order, extinguish all flames and end all forms of terrorism and criminality in north-eastern Nigeria by kinetic and most importantly non-kinetic operations.”

He added that the operations were being conducted in Sambisa forest, the Tumbuktu triangle and the Mandara Mountains in protecting people’s lives and property.

He noted over 60,300 communities and captives were liberated and rescued from the forest and Lake Chad region.

General Musa also used the opportunity to call on remnants of Boko Haram terrorists to come out from their hideout and embrace the amnesty programme of the Federal Government, aimed at rehabilitation and reintegrating them back into normal life.