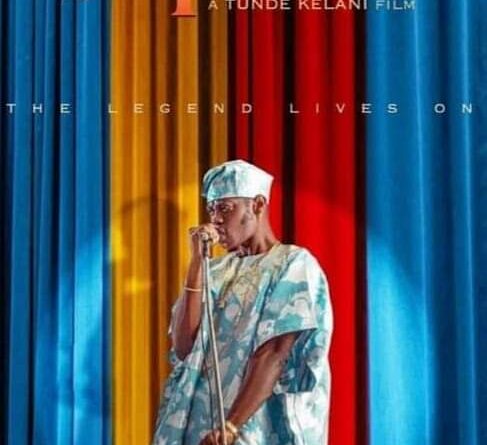 Ayinla: A Nostalgic Rollercoaster of a Ride, By Gani Kayode Balogun Jr

I watched the Tunde Kelani directed Biopic : AYINLA twice, one as a fan, and second as a critic.

As a fan, the movie is almost flawless, save for some glaring timeline mixups and taking some very large bite of the poetic license pie in reconstructing the Ayinla story.

The plot was straightforward enough. It is about the last few weeks of Egunmogaji’s life, driven solely by preparations for the London Musical Tour analogy that formed the nucleus of the latter day Ayinla myth.

The storytelling was top notch: a good mixture of comedy and tragedy and the reinforcement of the what if? mindset of most loyal of Ayinla Omowura fans in the last four decades, irrespective of age or status.

I really love the emotional heart string pulling style that was expertly used in the third act of the film. If you had watched Tunde Kelani’s Maami and Kunle Afolayan’s October 1, then you know nobody does the tragicomical emotional Rollercoaster ride than the duo, who incidentally, also played critical and/or cameorole in the film.

Kunle Afolayan played Bisi Ajala, the street savvy music promoter that was packaging the tour until tragedy struck. While TK was the cameraman of the TV crew that came to interview Ayinla from WNTV/West (in 1979?).

The casting was generally well done, although some the characters that were critical to the plot have no character arc, and were mostly used as comedic props, a general flaw that I am almost certain arose out of the notion that the viewers are probably aware of who they were and what roles they played in the Ayinla journey.

The Olowoyo-Ayinla feud /reconciliation was used as a throwaway without any background provided, not even as a simple dialogue by the elders or as flashback.

The lead actor overdelivered. His emotional range is exquisite. Although I found the dialect used by most of the supporting cst a tad out of touch with the rustic environment they portrayed, it did not diminish the quality of their delivery in any shape or form.

The Ayinla songs that were selected for performance by the lead actor were some of Ayinla’s most popular tracks, the usage were clearly out of sync with the historical period they were released, but that could be excused that this is a biopic, a snippet of his person, not a recreation of his journey.

I highly recommend this movie for whoever loves a good visual storytelling by some of the best in the business. There are some things I thought would be addressed in the movie that were left out, but I understand that a two hour movie can only accommodate so much, without turning mushy and uninteresting.

I love the fact that the Ayinla essence was not diluted for political correctness, nor whitewashed as a revisionist tool. His depiction was presented almost faithfully for all to see, warts and all.

You will enjoy the Abeokuta scenic ambiance, great attention to details of ensuring that customes and landmarks reflect the time frame by the director, and a cinematographer that captured even the slightest nuance by the characters.

Like I said, I have watched it twice, and all thing being equal, I will watch it again.

No Tears for Nnamdi Kanu, By Farooq Kperogi