At last, our governor has given his first-ever major media interview since assuming office in 2019. Even if the privilege was extended to only one medium among the hordes of excellent media organisations across the country, it is still something to rejoice over. For, at least, no more scepticism about the competence of His Excellency to face the media; if the interview was done in-person and not the type where question items are routinely seemingly sent to him for responses in writing.

But much as one would have rejoiced even more about this development, the interview gave away little or nothing about governance, which is usually the focus of such engagements, particularly for someone who since assuming office some 29 months ago has not deemed it fit to subject himself to media scrutiny in an interview format and allow the world to gauge his capacity, depth of intellect, innovativeness and achievements. Rather, the lengthy interview was devoted to demonising his predecessors and his battle with his former friends who have now turned his foes.

INCYMI: INTERVIEW: AbdulRahman AbdulRazaq: How Lai Mohammed Dehumanised Me (I)

If a governor decides to spend such a long time discussing these pedestrian matters bearing no significance to the well being and welfare of the people, it means the items mean so much to him. It means, of course, that there is fire on the mountain and we must begin to look for firefighters to douse it. Even if GAA refuses to acknowledge this publicly, a neophyte communication strategist can easily tell that in reality, that interview was largely reactive. It was an attempt to dress the opponent in satanic robes so that when they begin to speak, the public would think they are liars.

It was a letdown because we were expecting an interview that will explain the huge amount of money alleged by EntSud as differences between what was approved for some projects and what was spent. He could have used the opportunity to clear the air on allegations that he spends a better part of his time outside the shores of Kwara possibly for personal business.

It was a letdown because one was expecting that in his first major interview, our governor would use the opportunity to clear the air about allegations that he has turned his government into a family affair. Would it not have been more engaging if he had used the opportunity to talk about the controversies that surrounded the resignation of some of his officials? What about COVID-19 and its palliative? Did he truly donate his salaries for the people? You see, many things have happened in the last 29 months that our governor could have focused on to explain to the public, but instead he chose to speak on the personality clash he has been having with some of his former co-travellers.

The interview was at best petty for a state executive to have granted. But of course, it shows the personality of the governor. If he could be silent on the issue of local government election and the illegality of his Transition Implementation Committee but could only come out to speak now that the people are working against him, what do we call that? If the people were not willing to support him after he ‘won’ his party’s primaries, then something must be wrong with him, or about him, that those people knew but which was probably hidden from the public knowledge.

And again, has GAA forgotten that someone established the Kwara State University, Malete, which he arbitrarily and seemingly unjustifiably appointed its VC? Has he suddenly forgotten the ” Every Child Counts” policy of the Bukola era? What about the aggressive infrastructure development and Shonga Farms which sign posts the principle of agribusiness as a model for sustainable agriculture development? Has our governor forgotten the various Housing Estates in the three senatorial districts of the state, Diagnostic Centre, Aviation College, first overhead bridge in the North Central at post office in Ilorin, all during the time of Bukola Saraki as governor? The Banquet Hall which they turned into a boxing ring and the metropolitan square at Asa Dam were constructed by Dr Bukola Saraki.

What a disservice to alleged that he met nothing on ground.

Lest I forget, in just 100 days in office, Dr Ahmed was able to fill all potholes on our roads; renovated the school for the physically challenge and completed the A Division/Offa garage road,  Ganmo/Afon road and Lafiagi Township road. Dr Ahmed took the Harmony Diagnostic Centre, the International Aviation College and the Kwara State University at Malete to new heights that attracted international attention during his time.

A revolutionary course of action by Dr Ahmed was the evolution of a new Kwara State Internal Revenue Service (KWIRS) which moved the state’s monthly internally generated revenue to almost N2b from N600m in its first year. With KWIRS concept, the administration was able to conveniently put aside a minimum of N500 million monthly for the purpose of meeting obligations to contractors working on several infrastructure projects.

With the Infrastructure Development Fund, IF-K, Dr. Ahmed constructed the Diamond Underpass at the Geri Alimi area, dualised Sango to Uiversity of Ilorin Teaching Hospital road, built Kwara State University campuses in Osi, Ekiti local government and Ilesha Baruba, Baruten local government areas of the State, established the IVTEC at Ajase-Ipo, the first of its type in Nigeria, built the School of Business and Governance in Ilorin, deployed about 78km of solar streetlight infrastructure under a 10 years PPP arrangement with operation and maintenance agreement over the PPP lifecycle and introduced an Asphlat Plant with double advantage: hardly do we have states around us with such an investment and so we can make money from it while still ensuring that our roads now no longer lack prompt attention.

Mr. Governor, space will not allow me reel out various other infrastructure developments of those 16 years you called waste. Time is ticking. There is no more time to waste on frivolities and acrimonies. All over the world, government is a continuum as no one finishes the business. Do your bit and exist the stage for posterity to judge. The silent majority of Kwarans need improvement in their social status, our youths need job and empowerment and the security situation is pathetic. We need a governor who talks and listens to us, not an absentee governor whose style brings opprobrium to Kwara despite the huge opportunities he has and the social capital that brought him into office? 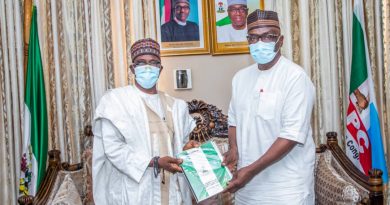