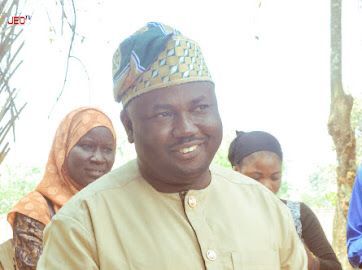 The Senior Special Assistant on Community Intervention to Kwara State Governor, Hon. Kayode Oyin-Zubair has weekend assured the people of Igbaja in Ifelodun Local Government Area of government interventions, following a rainstorm that destroyed many buildings in some parts of the community on Thursday night.

The rain, which was reported to have started around 10pm lasted for about an hour, leading to the destruction of some structures such as FOMWAN Primary School, ECWA Secondary School, Igbaja, residential homes, mosque, church, shops among others.

Oyin-Zubair who was on assessment tour to the affected areas empathized with the victims, however linked the disaster to climate change.

He, therefore, sues for calm, promising that relevant government agencies will be mobilised as soon as possible to respond to the havoc caused.

He further cautioned residents of Kwara state on deforestation, saying its repercussion brought nothing but damages to human livelihood.

While reacting, the Headmistresses of the affected schools lamented the psychological effect on the students, saying the incident has destabilized the pupils and academic activities.

Also, the Imam of Oke Suna, Idi Aba, Alfa Ismail said the incident led to their inability to observe congregations’ prayers in the mosque.