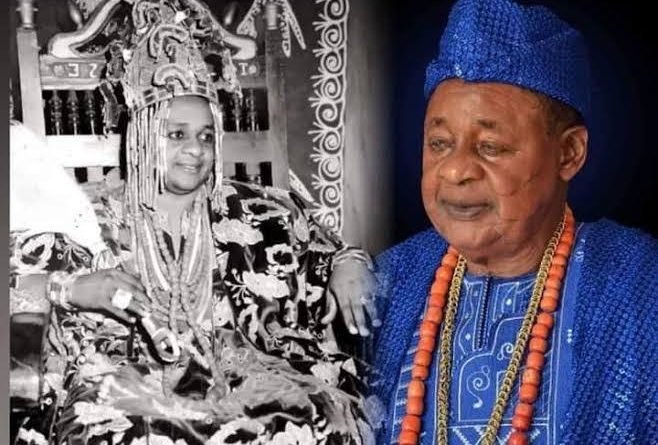 Oba Lamidi Olayiwola Adeyemi spent his last three months winding down in a spectacular way. He made some moves and held some meetings which, in retrospect, showed that there was some urgency in his strides. On February 8, 2022, he was at the University of Ibadan as chairman of my book launch. His speech at that event was short and straight: Federalism for Nigeria or we forget it. He got back to the palace in Oyo that evening and started working on a document that expanded those views he espoused in Ibadan. The document was ready and he signed it the following day, February 9, 2022. On March 30, 2022, he signed out letters to key Yorùbá intellectuals and professionals calling their attention to his document and demanding that they got back to him “in due course.” One of them is Siyan Oyeweso, professor of history. On Friday, 22 April, 2022, he sent his personal assistant to an oba in Osun State to hand-deliver those documents to him. By the evening of that day, it was that emissary who called Oba Adedokun Abolarin, the Orangun of Oke Ila (who got the documents hours earlier) that the ceiling had caved in in Oyo, Baba was gone.

The Aláàfin  who just left was pretty inside and outside. He had brain and beauty in superlative measures. Oyo’s king was not ‘Alaafin’ at the very beginning. He was first Oranyan, an intrepid prince who followed fate, fought his way and became Ọlọ́yọ̀ọ́ (Owner of Ọ̀yọ́). A string of unusually progressive occupiers of that stool followed Oranyan. They built so vast an empire no one had ever built. They created for that realm a capital in the savannah and a golden palace in the city and the king’s description changed. The king remained not just the owner of Ọ̀yọ́, but from then on, he became the ‘Aláàfin’, the only king who owned what could be called an Aafin – or if you like, say it in the white man’s language – a palace. Two pioneering Englishmen in 1828 entered Ọ̀yọ́ Ilé and marveled at the magnificence of the city, its palace and its market square. Read Captain Hugh Clapperton and Richard Lander and feel how effusive they were in their praise of what they saw on that explorative visit. The Ààfin was the physical representation of the awesomeness of Oyo’s success as a nation-state. That was the burden of heritage which 31-year-old Lamidi Olayiwola Adeyemi got on his shoulders on November 18, 1970. He discharged the burden (or was discharged of it) successfully on Friday, 22 April, 2022. He was 83 years old.

Two years ago, Ọba Adeyemi summoned me to his presence. And I wrote then that it was not the first time I would be inside that palace; but it was the first time I was Alaafin’s guest. “Bàbá said I should bring you tomorrow,” Festus Adedayo, the message carrier, told me. I kept the date while wondering why my lord summoned me. I got there and was told by the king that it was to commend me for what I wrote weekly. The palace is ancient and vast with courtyards as many as the stars in the sky. Was this the Aafin that gave Alaafin his title? No and Yes. I wrote two years ago that I got to the palace and I looked around. I saw in humans and in architecture a fine mix of the modern and the ancient. I saw resilience of culture; I saw the agelessness of an aged heritage, the palace. I saw the present holding the future in the cusp of values. I remembered history and the ups and downs that defined the fortunes of that kingdom and its chequered existence. About 190 years before that date, there was no Oyo where I was, so there was no palace. What was here was an Àgọ́ (a hamlet) called Àgọ́ Ọ̀jà. The ancestral Ọ̀yọ́ was 130 kilometers north of here but because wherever the Alaafin chose as his abode was Ọ̀yọ́ , that Àgọ́ became the city that we all throng today. That change happened in about 1838 when treachery and the enemy prevailed and the city of grandeur was abandoned forever. The golden city became Old Ọ̀yọ́, a relic of the glory of the past.

The first king of Ọ̀yọ́ was Oranyan; the one that left the stool for Ọba Adeyemi III was Bello Gbadegesin Ladigbolu II. Between the first and the last were about six hundred and seventy years of 43 kings of various moral textures and temperament. The Aláàfin that answered the call of his ancestors on Friday was a reincarnation of the best of all his forebears. He was adventurous like Ọranyan who birthed the kingdom. He was gentle and not gentle like Àjàká and Sàngó, the one who gave justice with lightning and thunder. He was a progressive in the mould of Abiodun during whose time the city people wore the best of dresses. He was a city builder like Atiba, the Alaafin who turned Àgọ́ to Ọ̀yọ́. If you found Olayiwola Adeyemi with a hundred wives, know that he had a father called Aláàfin Olúaṣọ (1457-1500). With wives in every room, Olúaṣọ filled the palace in Ọ̀yọ́ Ilé with 1,460 children. Read the history and the story of his fathers and their kingdom. They tell why Adeyemi III was the stellar king that he was.

I went to Ọba Adeyemi a couple of times in the years of our closeness. Our last two sittings were very instructive in the depth and breadth of the discussions. I was in the palace in December 2021 to invite him to my book launch slated for February 8, 2022. He got the letter and told me “Àá wàá (we will come).” Then he saw my knees on the ground and released a torrent of deep prayers for me. I wondered what informed the prayers as I said Amin to each of the royal points of invocation. Then he brought up matters, regional and national. With Festus Adedayo beside me, we discussed issues not persons. We analysed Nigeria and interrogated why its crooked walls must be brought down and rebuilt if it won’t fall on all of us. We discussed rights and freedom, Abuja and the impunity of its arbitrariness. No one should be too big for reprimand, I said and looked into the oba’s eyes. A hundred or two hundred years ago, if I uttered that statement in the palace and, even, far from the palace, whisperers would point at the king as the object of my shot. But I said this in the very presence of Ọba Adeyemi and nothing happened. No. Something happened. He offered to tell the story of a certain ancient drummer who was reported to the king as using his drum to incite the people against the palace. He was brought before the oba. “What did I do wrong that informed your negative drumbeats?” the king asked the drummer. The man chose to answer the king with his drum releasing the same offensive notes. The king listened carefully to every stroke of the drummer’s stick. What was he saying? “Kòtò kan ń bẹ ní’ta ọba, Ọlọ́un ó mu kò ì yá ni (There is a pit in front of the king’s house. God will catch him, but it is not yet time).” Only the king and his agents knew the meaning of the drummer’s words. Ọba Adeyemi explained to us that in front of that king’s house was indeed a pit where he regularly secretly dumped the heads of his critics. The ọba got the message and quickly discharged the drummer – to the shock of hardliners who thought he should be executed for treason. “Nothing must happen to him otherwise we will all be in trouble,” the king told his audience as he discreetly closed the pit of death forever. That drummer was you people who write every day, Ọba Adeyemi told me and my friend. He asked us never to stop.

It is awesome to have the Alaafin as one’s cheerleader. I had Ọba Adeyemi as a fan and he was very loud about it. “I have a file on you…” he told me on the day of our first meeting. He was sartorial in taste; he loved beauty and excellence and allowed their pursuit to dictate how he chose his friends. The king that was buried on Saturday was at the launch of my book, ‘Cowries of Blood: Essays on Herdsmen, Banditry and Nigeria’s Endgame Politics’, on February 8 this year. Without telling him ahead of the day, he was made the chairman of the event and he took charge. He sat through the event and gave me a cheque of six heavy figures. He delivered a speech which was an urgent call to duty. He said his father, Ladigbolu the First, warned the British in 1914 that the amalgamation document they made him to sign marked the creation of a union of preys and predators which would not bring peace. “No one listened,” Ọba Adeyemi said and added what he always shouted: Federalism is the only way to go if Nigeria’s disparate peoples would ever live in peace and harmony. We heard the Alaafin but I am not sure we listened to him.

Ọba Adeyemi was valourised as the Lion of Akesan hill (Kìnnìún Òkè Akèsán). He was also the Òrìsà Ọ̀yọ́, the fearsome one that rumbles the shrine. He was a modern king who operated within the leash imposed by his culture and tradition. He never strayed away from his covenant with the beginning. He flaunted the richness of his heritage and danced with gusto to the applause of his ancestors. His brain was his greatest asset. He was a library of prodigious richness. Ọba Adeyemi was loud without being lousy about his royalty. As I once wrote, his royalty proclaimed his excellence. Kola nut is the prized snack of elders. They break it for peace and friendship and worship. That is why it is always well preserved from the ravages of weevils. The nut sometimes strolls into dirges as a metaphor for the best of men. And because every creation must go back to dust, kola nut finds its own death, its nemesis, in pests which assail its lobes of value. When it happens, the Yoruba say kòkòrò (weevil) has denied them the sweetness of obì t’ó gbó (good kola nut). They utter that lamentation and quickly add that death has denied them the warmth of their personal person. That was the case with the hundreds who wailed at the Ààfin in Ọ̀yọ́ on Saturday. It was the same with millions of us, Ọba Adeyemi’s persons outside Ọ̀yọ́ . He was an Ọba who clothed all of us, his people, with the velvet of respect and respectability. He was a father and an inspiration to many in many ways.

I listened to the maidens of the palace on Saturday after the burial. They sat forlorn and elegiac, ending their every verse with the teary refrain: “Awó sí / Awó lọ/ Atanda r’elé e rẹ̀ /Ó tán nù u(Awó moved/ Awó left/ Atanda has gone to his home/ It is finished).” Ọba Adeyemi Atanda worked very hard but the labourer’s task will always be over one day. It was over for him on Friday. The voyager has, at last, landed upon the farther shore. Those lines paraphrased the solemn words of John Ellerton. Ọba Adeyemi’s bones now rest with his ancestors’ in the vaults of Ilé Alowolodu at Bara, one and a half kilometers south south-west of the expansive Ààfin, from whence they came. A very successful Kabiyesi’s toils were over four days ago; we wait to see who comes next. 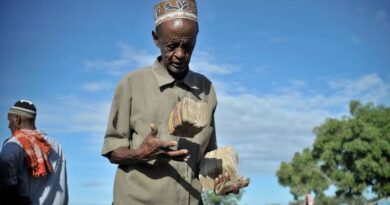 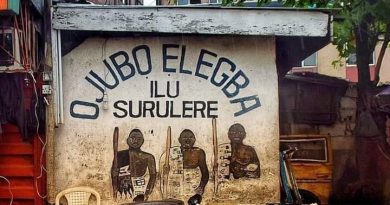 A Brief History of Ojuelegba