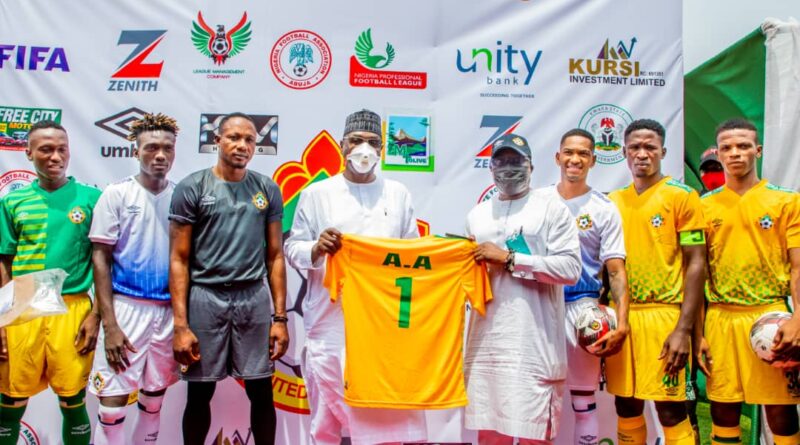 Kwara State Governor AbdulRahman AbdulRazaq on Thursday unveiled the new jerseys for the Kwara United Football Club as part of the government’s efforts to promote the current leaders of the Nigerian Professional Football League (NPFL).

At the event held at the Kwara State Stadium Complex, Ilorin, AbdulRazaq called on stakeholders in sports industry to redouble their efforts in promoting and showcasing Kwara United Football Club as a good brand for corporate entities to invest in.

“Today’s event fits into our administration’s commitment to promote the state’s heritage, its people and what it represents. Kwara United Football Club used to be a household name and a brand to reckon with in Nigeria. It had a longstanding history in the game of round leather. That was when this stadium complex was at its best,” he said.

“We are doing everything within available resources to reclaim the glory of our state across all sectors. We are investing a lot of money to bring back critical sports infrastructure. We are building squash courts that will be the best and largest in the country. We have intervened in Kwara Football Academy’s Hostel, Volleyball Court and Baseball Court while also fixing the Olympic standard Swimming Pool, among others.

“In those good old days, the stadium complex used to play host to thousands of spectators in various sporting events. It is therefore important that we support every effort that will promote our sporting activities in the state.”

He commended the pole position of the Kwara United Football Club on the Nigerian Professional Football League table, attributing it to prudent management of resources by the team managers who recruited great players for the NPFL campaign.

“Good management is key and giving the right support to the management. They have been able to use what we gave them judiciously to get to that position. It is about having a good management who knows how to get good players and how to use them,” AbdulRazaq said.

“I am proud of the current status of Kwara United Football Club in the Nigeria Professional Football League. With the right support and all stakeholders working as a team, I have confidence that the Club stands a strong chance of winning the league and continental ticket.”

AbdulRazaq appealed to all Kwarans to allow the jerseys to connect them with the Club, urging the people not to abandon the promotion of the jerseys for foreign clubs’ jerseys.

The Governor said the administration has commenced comprehensive facelifts for existing sports infrastructure in the state and construction of modern ones such as the ongoing twin squash courts, handball and volleyball courts, among others.

Senior Counselor and Advisor to the Governor and Chairman of the event Architect Kale Belgore urged well-meaning individuals and corporate organisations to support Kwara United Football Club in regaining its lost glory.

Chairman of Kwara United Football Club Kumbi Titiloye, for his part, said the launching of the jerseys was organised as government alone could not shoulder the responsibility of sports development in any state.

“We decided to launch the replica jerseys for the support of government and sports loving people of Kwara State to increase our revenue base and to officially open our merchandise new store,” he said.

“We thank God for today. With the administration of Governor Abdulrahman Abdulrazaq, Kwara United Football Club that was in the Nigeria National League has been promoted to the Nigerian Professional Football League. Today, with the full support of His Excellency and the good people of Kwara State as well as the Ministry of Sports and Youth Development, Kwara United has been able to recruit young, vibrant and fantastic footballers to prosecute the 2020/2021 season.”