The Customs Area Comptoller, Kano/Jigawa Area Command, Comptroller Suleman P Umar, has vowed that the Nigerian Customs Service (NCS) will not relent in its effort towards confiscating foreign rice and other prohibited items which is killing local industries and preventing Nigeria’s economy from thriving.

While disclosing that the command raked in N5.5billion between January and February 2021, Umar said several bales of second hand clothes from China, bags of rice and cartons of couscous concealed in sacks of animal feeds were seized.

The controller who made the disclosure while conducting Journalists round the seized products, affirmed that his men conduct takes due diligence in checking items imported into the country.

“Imagine the new technique of importing rice, couscous, spaghetti and other food items. This is killing our industries and making them redundant resulting to unemployment which leads to many unwanted activities. So we would not relent, we would keep seizing rice even if it is one mudu,” he vowed.

Lamenting the seized second hand clothes from China, SP Umar noted that citizens need to be wary especially with the history of COVID-19 origin from the same destination.

“The second hand clothes could be those of Corona victims no one can tell. our citizens should be careful while patronising such clothes especially since their origin are not known,” he quipped.

SP Umar who told reporters that this was achieved through the proactiveness of the Customs Intelligence Unit, pledged that the command shall continue to sharpen intelligence and enforcement capabilities to fight smuggling and enforce compliance with extant laws and procedures.

He also revealed that the Maigatari Border has been reopened in line with the Presidential directive and his men are doing everything possible to encourage patroitic citizens to take advantage of the development and engage in legitimate businesses through the border. 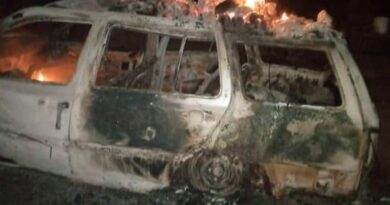