There was a reported breach of security at the Nigerian Defence Academy, NDA, Kaduna by some dreaded bandits, leading to the killings of two brave officers while two others abducted.

INCNews247 gathered that the gunmen invaded the Afaka barracks around 0215am on Tuesday and went straight to the Officer’s Quarters.

Confirming the incident, the Nigerian Military Spokesperson, Major General Olufemi Sawyerr said, “It’s true there was a breach of security in NDA.”

“Bandits at about 0215am sneaked into the large expanse of the NDA and went straight to the officer’s Quarters where they killed 2 brave officers who fought them to resist abduction. 2 other officers were reportedly abducted,” he added.

He said although the Commandant of NDA and staff are working in synergy with HQ 1 Div and the NAF to track down the miscreants.

“The attack by the bandits must have been well planned following their aimed target area within the NDA permanent site complex.

“Efforts are ongoing to ensure the rescue of the officer abducted and also to clear the bandits.

“We are in touch with NDA and as events unfold the press will be adequately briefed.” 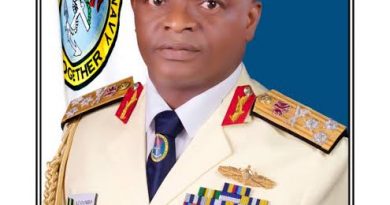 Amidst 66th Anniversary, Nigerian Navy to Take Delivery of UAVs