In a series of path-breaking scholarly articles, eminent University of Texas linguistics professor Ian Hancock has demonstrated that Nigerian Pidgin English, Cameroonian Pidgin English, Sierra Leonean Krio, Jamaican Patois, and all the English-based creoles in spoken in the United States and in predominantly Black Caribbean nations trace their roots to a linguistic ancestor that was formed in the coast of West Africa in the 1550s.

Even parts of African American Vernacular English (informally called “Ebonics”) in the United States are descended from a West African linguistic ancestor.

Hancock calls the ancestor language that connects large swaths of Black people in Anglophone Africa and the Americas “Guinea Coast Creole English.” (“Guinea” is the historic term used to refer to Black people, which traces lexical provenance to Portuguese Guiné by way of the North African Berber Ghinawen, which means “the burnt people,” apparently in reference to our dark skin.)

Nonetheless, although it formed in coastal West Africa, as with most pidgins, Guinea Coast Creole English emerged from Europe and merged with African languages, creating a situation where most of the vocabulary of the new language is European while its structure is mostly African.

According to Hancock, Guinea Coast Creole English was born when, in 1553, British sailors made the decision to migrate to West Africa permanently. The Portuguese called them—and other Europeans who came to Africa—lancados, which denoted people who “threw themselves” from ships into distant, unknown lands.

The lancados from Britain, Hancock pointed out, were a mix of fun-seeking adventurers, criminals escaping justice from their homeland, and political refugees running away from persecution. Their ages ranged from 15 to 30. My own suspicion is that the lancados were sent to West Africa by slave merchants preparatory to the mass enslavement of Africans, as I will show later.

At the time of their emigration, Standard English hadn’t been birthed, and they spoke different dialects of the English language.

Because they spoke different English dialects, which were sometimes mutually unintelligible, they devised a means of communication by identifying what was common to them and abandoning dialectal shibboleths that were unique to them. Linguists call this process “levelling,” that is, uniformizing linguistic codes among divergent people to aid unimpeded communication.

After the Lancados from Britain arrived in coastal West Africa, they married African women and gave birth to biracial children who spoke a fusion of the languages of their mothers and their fathers. The resultant language was called West African Coast English (WACE). In time, other Africans came to live and socialize with the mix-raced communities that had formed in the coasts, and learned to speak WACE.

With more Africans speaking the emergent language, it evolved fundamentally. Words from Mandinka, Igbo, Serer, Wolof, Temne, Susu, and so on began to creep into the language. The new language also began to mimic the structure of the languages of its non-native West African speakers. The ensuant language, over time, which later came to be known as West African Pidgin English, became mostly structurally African and mostly lexically English.

Slavery started about this time. Whenever Africans were enslaved from the coast or the hinterland, they were first imprisoned for at least a year “in the coastal barracoons and factories before transportation” to America and the Caribbean islands.

In other words, West-African-Pidgin-English-speaking coastal areas served as the venue for a linguistic initiation ritual for enslaved Africans before their eventual expatriation to the Americas. This is why I think the Lancados from Britain weren’t just random fun-seeking Britons, political dissidents running away from political persecution, or outlaws evading the consequences of their crime at home. They were a core group whose services were indispensable to the slave trade.

Enslaved Africans who arrived in the Americas from the 1600s to the 1860s were at least bilingual in their native languages and West African Pidgin English. Nonetheless, because slave raiders did not, as a deliberate policy, allow Africans who spoke the same native language to be together for fear of mutinies, they communicated with each other in the West African Pidgin that they’d learned during their one-year imprisonment in coastal West Africa before their forced trans-Atlantic transportation.

Subsequent generations of enslaved Africans in the Americas creolized the West African Pidgin English that the previous generations spoke. Pidgin, derived from the Chinese mispronunciation of “business,” is defined as a “contact,” “emergency,” or “trade” language that emerged from the admixture of foreign (usually European) languages and indigenous (usually non-European) languages with no native speakers. Pidgins become “creoles” when they become the native language of a people.

Because enslaved Africans in most parts of the United States were surrounded by white people, the West African Creole English they spoke underwent a process of decreolization, which is the conscious or unconscious purging of the structures and vocabularies of a non-European language in creole languages.

But decreolization is not always total. That’s why linguists talk of “vestigial post-creoles,” which are decreolized languages that nonetheless have faint echoes of the indigenous languages they purged themselves of.

For example, as I showed in a previous article, Nigerians and Black Americans say someone has “home training” (sometimes “good home training”) to mean the person is of good upbringing. So “home training” is synonymous with what white native English speakers call “good manners,” “proper breeding,” or “polite behavior.”

White Native English speakers use “home training” only to refer to the training of animals (such as pets) at home and for physical exercise at home instead of the gym.

But in African-American Vernacular English, interestingly, “home training” means exactly what it means in Nigerian English. I haven’t figured out why that is the case. But one theory I have proposed is that the expression is probably a remnant of Ebonics’ dim and distant linguistic affinity with Guinea Coast Creole English or its descendants.

“Home training” is probably a direct translation of one or some of the West African languages that contributed to the formation of West African Pidgin English from where Ebonics emerged.

But the phrase “who dat” has a cultural significance in America that goes beyond its semantic properties. It is popularly associated with the New Orleans Saints, an American football team located in the southern US state of Louisiana. During games, fans of the team always chant: “Who dat? Who dat? Who dat say dey gonna beat dem Saints?” [Who is that? Who is that? Who is it that says the Saints will be defeated?]

We also know that most of the African words and expressions in the English language (such as “yam,” “tote,” “okra,” “banana,” “chimpanzee,” “bug,” “to bad-mouth,” etc., which I’ve chronicled in a four-part series titled “The African Origins of Common English Words”) came to the English language by way of African American vernacular English.

While most of African American Vernacular English has been decreolized, Gullah, found in the states of Georgia, South Carolina, and Texas, about which I’ve written several articles, still largely sounds like West African Pidgin English because the speakers of the language were isolated from mainstream America for centuries.

The English-based creoles in the Caribbean islands (such as Jamaican patois) also retain a heavy dose of African words, and the one word that almost all of them share is the Igbo word “unu,” which is, like in Igbo, the plural form of “you” (the singular is “ya,” as it is in Igbo).

While “una” is the preferred form of the pronoun in Gullah, other variants exist, such as “huna,” “wuna,” and “unu” (preserved from the original form in Igbo). In Gullah, “mi na una” means “me and you,” where “na” means “and,” as it does in Igbo. 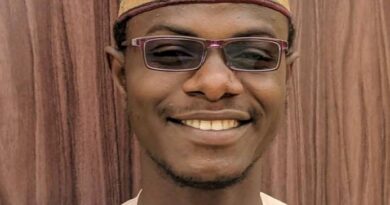 Optimism in Thinking is Success, By Attahiru Fadlu-rahman Manga