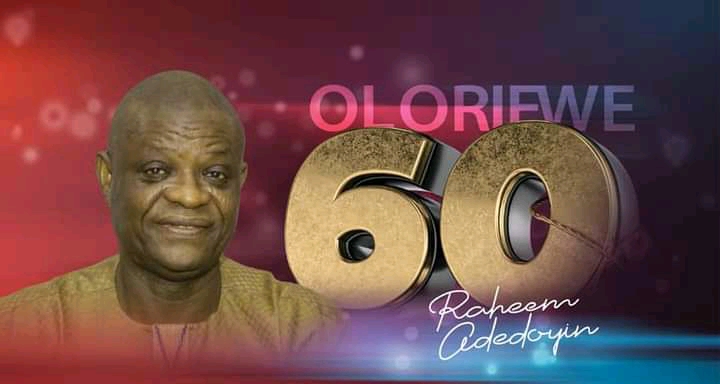 It is yet another day to celebrate Alhaji Raheem Adedoyin, the intrepid reporter, prose stylist, editor par excellence and astute political strategist as he turns 60.

Adedoyin,who is fondly called Raheem in professional circles or Oloriewe by his crop of ardent admirers, is unarguably one of Igbomina’s best gift to Nigeran journalism.

While the Diamond Jubilee is a milestone often celebrated to the hilt in this clime, there may be no clinking of glasses this time in celebration of Raheem and this is quite in tune with the sobriety of the times.

Nigeria is certainly not at peace, and the public lecture to honour Raheem is at once a protest at the dire straits this benighted nation state has found itself in and the need for deep introspection on the human condition in the country.

The lecture to be delivered by the quintessential journalist and publisher of Premium Times, Mr Dapo Olorunyomi, is billed for the expansive Banquet Hall in Ilorin while doyen of Nigerian journalism and former governor of Ogun, Aremo Segun Osoba, is chairman of the occasion.

Of course, Gov. AbdulRahman AbdulRazaq will be there, leading the cult followership of All Progressives Congress foot soldiers who hold Raheem in high esteem. But so would others from diverse political divides who share deep affection for him.

The Oloriewe of Oro Kingdom and Bobakeye of Agbonda Eku Apaland, all in Kwara deserves all these and even more!

Raheem’s background is a study in resilience, iron clad determination and clarity of vision.

Starting out early in life in the laid back ambience of his Ijomu Oro community, the starry-eyed lad was not in doubt that education offered the ladder to a world of limitless opportunities.

He began his climb on the education ladder at Ansarul Islam Primary School, Ijomu-Oro, in 1967.

Raheem was to later attend the Ansarul Islam Grammar School, Ijomu-Oro, for the West African School Certificate, Kwara State College of Technology, Ilorin, for the General Certificate of Education(GCE) Advanced Level and the elite University of Lagos, Akoka, for the B.Sc Mass communication degree.

He also has in the kitty the Masters of Public Administration (MPA) degree of the Lagos State University (LASU), Ojo.

While he had a smooth climb up the education ladder, some of the defining moments of his life were, however, to be recorded in the practice of journalism, a profession he dedicated about four decades to serving.

At The Guardian, which prided itself in its “intellectual journalism,” Raheem was one of the poster boys of the newsroom.

Indeed, it is to his credit that transport reporting became an attractive genre for young and eager reporters and it was no surprise that Raheem was made Transport Editor of the Guardian in record time.

Expectedly, rewards came in torrents and most notable was being pioneer winner of the Lt-General J.T Useni Prize in Transport Reporting at a ceremony attended by the top brass of the Nigerian military, including late military president Sani Abacha, General Oladipo Diya and Useni himself.

He was also an Assistant Editor, deputising for the Editor of the Guardian on Sunday, one of the paper’s leading titles.

In the temptous times of the Sani Abacha era, the late business mogul, Chief Akanni Aluko, had invited Raheem and his firebrand editorial crew from The Guardian to help save his failing Third Eye newspaper titles located in Ibadan, South West Nigeria.

As pioneer Editor Daily of the Third Eye between 1995 and 1996, Raheem worked with his colleagues from the Guardian to change the fortunes of the newspaper titles, thrusting it to the national stage in newspapering.

At The Comet where he was also General Editor, Raheem had the responsibility of coordinating various aspects of the media outfit, especially its business development programmes.

An ingenious rebranding specialist, Raheem was to return to his home state of Kwara to revive yet another moribund newspaper stable, The Herald, working with top media consultants in Taijo Wonukabe and Associates.

As Chief Executive of the Herald titles, Raheem and his editorial team embarked on an ambitious resuscitation programme to breathe life into the media outfit and fortuitously emerging an early innovator in colour printing in the nation’s newspaper industry.

That the state government-owned newspaper is still on the streets is a testament to the structures and processes put in place by the Raheem administration.

A restless soul, Raheem was to turn his attention to politics in the heady days of the Obasanjo administration, pitching his tent with the Peoples Democratic Party.

His first shot at politics was to be elected a national officer of the PDP– Deputy National Publicity Secretary–at the party’s national convention in Abuja in 2001.

For a fresh entrant, it was an ambitious move, yet Raheem made it! Since then, he had not looked back.

Appointed a member of the Kwara PDP Special Committee on the review of the 1999 Constitution and Secretary of the Publicity Committee of the Obasanjo/Atiku Presidential Campaign between 2002 and 2003, Raheem played a crucial role on the national stage.

This role was further amplified as Chairman of the PDP State Electoral Panel for Jigawa State and National Delegate to the PDP National Convention in 2003, 2005, 2006, 2007 and 2008.

Although a critical player on the national stage then, Raheem was literarily dragged home and was variously Special Adviser on Communication and Strategy, Commissioner for Information and Home Affairs and Commissioner for Education.

In the crisis that engulfed the Peoples Democratic Party ahead of the 2015 general elections, Raheem and some other party stalwarts joined the then putative coalition of some four legacy parties that eventually resulted in the APC.

Raheem was a delegate to the first national convention of APC in Lagos and the Kwara State Coordinator of the National Committee for Buhari Support Groups (NCBSG) for the 2019 general elections.

While holding his own with stoic comportment in the murky waters of Nigerian politics, Raheem was able to build bridges of alliances and friendships across diverse political divides through his “politics without bitterness” mantra.

To be sure, Raheem today continues to make seminal interventions in sundry political circles, especially in his home state of Kwara, he, however, remains firmly entrenched in the practice of journalism, especially in promoting the activities of the prestigious Nigerian Guild of Editors and the International Press Institute(IPI) in particular to which he has devoted much of his energy.

Raheem, who is the longest serving Secretary of IPI and headed the institute’s Secretariat for the hugely successful 2018 World Congress and General Assembly in Abuja, Nigeria, is a regular delegate at the World Congresses and other events.

This representative of Nigeria at the inaugural meeting of IPI National Committees in Baku, Azerbaijan in 2011, has been involved in IPI Advocacy activities, including an IPI Mission to Zambia, in 2010.

Only last year, he was elected into the highest echelon of IPI, the IPI Executive Board, representing Nigeria and Africa.

Apart from producing the glossy “The Icon” Magazine, Raheem is also a member of the Advisory Board of the London-based but continental operational African Leadership Magazine and one if its leading contributors.

Steeped in the very art of intellectual journalism, Raheem is also giving back to the profession. He is a regular face at the University of Ilorin where he teaches some mass communication courses for free.

As Raheem marks his 21,915 days on mother earth, this is to wish him many more years of self rediscovery. Happy birthday sir!

Sponsors of Nigeria’s Terrorist Bandits, By Farooq A. Kperogi