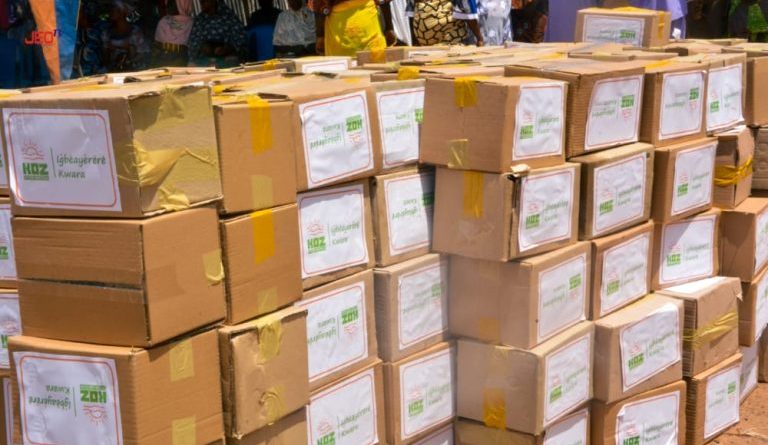 The Kwara State Governor AbdulRazaq AbdulRahman on Saturday flagged off 100 million Naira Intervention Fund for the people in all categories.

The programme organized by Kayode Oyin Zubair’s KOZ Intervention office aims at boosting the economic activities at the micro-level.

KOZ intervention is an organisation that makes a great contribution to community development, also empowers some members of the community.

Speaking at the flag-off, Mallam AbdulRahman AbdulRazaq said the business of nation-building and development can not be left in the hands of government alone if our society must witness rapid socio-economic development.

AbdulRazaq, represented by the Commissioner for Health, Dr Raji Rasaki emphasised on the need for community development, adding that the state government has consistently stated that every development partner in the building of the state will be given a space to contribute.

His words: “It is therefore my pleasure to be here to flag off this intervention that will reach different categories of our people. This support, which is planned to be revolving, will go a long way to boost economic activities at the micro-level thereby, creating wealth amongst our people.”

However, he said, the icing on the cake is that this event will release instruments that will be used for collating actual people that deserve this intervention. This, as I learned, will help to identify the core needs of the people and the best way to support them.

“As a responsible government, we are working round the clock to create new opportunities for our people; as part of the administration’s efforts to engage young people and stem crime,” he said.

Earlier, the Director General of the organisation, Mr. Gbadeyan commended the State Governor for honoring the invitation while in the same vein appreciated the traditional rulers who grace the life-changing event

According to him, “We shall be providing support of N100m for sometime through artisans, traders, and farmers. Those categories of people shall be our primary focus. We will consider other layers of society as well,” he said.

“It is no exaggeration that Governor AbdulRahman AbdulRazaq has performed beyond the ordinary bar of excellence, we, therefore, deemed it a duty to provide support for him here and there.

“This Intervention will provide small grants for the petty traders, group loans for market women, and support for farmers as an effort to create more wealth amongst our ever industrious people.”

In his remarks, the Senior Special Assistant on Community Intervention to Kwara State Governor who also doubles as the founder of KOZ Intervention, Mr. Kayode Oyin Zubair appreciated the creme de la creme who grace his epoch event.

The event is grace by Traditional rulers led by Elese of Igbaja, Top government functionaries, party stalwarts, market women, Transport workers among others