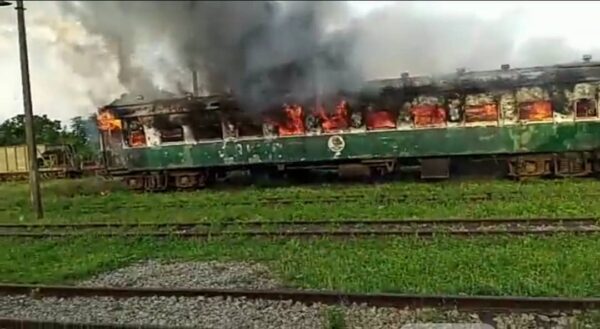 Confusion as Man Set Passengers’ Train on Fire in Kwara

There seems a confusion moment in Kwara State, following a strange act of a man who set a train carrying passengers and goods on fire.

The incident, INCNews247 gathered affected two out of 15 coaches of the train

The incident which occurred in Offa Local Government Area of the state said to be a deliberate act by the suspected arsonist.

According to witnesses, the act was committed by a yet to be identified man and fled the scene while the fire was raging.

While reacting, the state HOD of the Fire Service, Hakeem Adekunle, confirmed the occurrence, saying that the firemen halted the outbreak before it spread.

According to him, the train had a problem and was being repaired when it was set on fire by an unknown person.

“We gathered it was deliberate act. But, we were able to put off the fire and rescue the train after two of the coaches had caught fire.”

“The Director, Kwara State Fire Service, Prince Falade John Olumuyiwa ( CFO) urged the general public not to hesitate to call fire brigade on time whenever there is any fire emergency in their areas, as this would save lives and properties of people in the state”, he added.