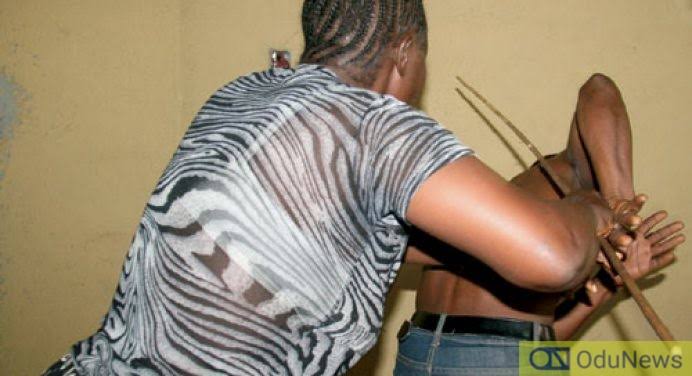 A 39-year-old man, Niyi Adeyemo, has accused his wife, Jumoke Bamgbola, 38, of beating him to a pulp during a disagreement at their residence on Love-All Street, Ikosi-Ketu, Lagos State.

Adeyemo, who was said to be suffering from arthritis, was admitted to a hospital after the alleged assault which happened on Monday.

According to PUNCH, the said marriage, which was consummated in 2018, hit the rocks in 2019.

Adeyemo, who spoke from a hospital bed where he was receiving treatment, said his marriage crashed after his mother visited their home and his wife objected to it because she did not like his family visiting him.

This, he claimed, led to their separation.

He said his wife’s demand for a divorce became intense when she returned from Dubai, United Arab Emirates, in January 2022.

He said, “Bamgbola stormed my house on May 30, 2022, around 11am and asked me why I had not been picking up her lawyer’s phone calls. I refused to respond and she said that I must talk to her because she came prepared for me.

“I tried walking away, but she dragged me back and tore my native attire specially sown for my late mum’s burial and became violent.

“She started throwing punches at me all over my body, especially on my legs because she is aware of my health condition. She tossed me around the house and kept saying that she would make sure I was admitted to a hospital.

“She also dragged my private parts and bit my hands as I tried to prevent her from biting my manhood. I deliberately stopped myself from hitting her like I was advised. So, I telephoned her dad and put it on phone speaker; her dad called out her name, but she refused to respond or listen to him.

“Her dad asked me to leave the house, but I couldn’t, as she locked my neck with my torn clothes and said that I must give her a divorce. I passed out as a result of the severe pain and later found myself in a hospital.

“My wife’s demand for a divorce became intense when she arrived from Dubai early this year. While she was in Dubai, we resolved our differences through video calls and made plans to relocate from where I stayed. But she suddenly changed and began comparing me with another man she met over there.

“She came back in January 2022 and requested to lodge at a hotel in the Lekki area of Lagos so as to self isolate because of Covid-19 to avoid virus infection on our son. Apparently, she came back to Nigeria with a boyfriend with whom she had arranged to spend the night in the hotel.

“I telephoned her several times, but she refused to receive my calls and when I used other people’s mobile phones to call, she cut off the calls after she heard my voice.

“She once telephoned me and said that only our child bound us together and I would be powerless after she took away our child. She later threatened to kill me with her bare hands if I didn’t give her a divorce because her boyfriend said that he could not marry someone who was married with a child.

“The matter has been reported at the Ketu Police Station, but she is yet to be arrested as she has gone into hiding.”

Reacting, Bamgbola said she filed for a divorce and her husband was served, but he refused to honour the court invite.

She said, “I went to the court on Monday to see the lawyer and he complained that my husband had not been picking up his calls or from my mum as well and I telephoned him, but he kept pleading with me that he did not want a divorce and that he had been suffering from anger disorder.

“He admitted that he allowed a third party in our marriage and that he was sorry. The lawyer told me that I had to see my husband and make him understand what I wanted because of our only child.

“So, I went to his place and met another lady with him in the kitchen. I asked for us to talk and asked why he refused to receive the lawyer’s calls and why he was telling people that he gave me N1.5m to rent an apartment, but he denied it.

“I actually visited to inform him that the court had fixed June 28, 2022, for our divorce case and discuss the matter with him if we could settle the dispute amicably. He usually beat me, but I always tried not to hit him back because he is a sickle cell patient.

“Apparently, it resulted in a fight, as I was also admitted to a hospital at the Ijoko area because I had a swollen face and bruises all over my body and could hardly talk. I visited the same Ketu Police Station to report a missing Samsung flip Z3 phone that I lost in his house and paid N2,000 at the station for the report.

“Ketu Police Station later reached out to me yesterday (Tuesday) that my husband filed a case of assault against me and I replied that I would visit the station on Sunday when I get better.”

The state Police Public Relations Officer, Benjamin Hundeyin, promised to call back our correspondent after confirming the incident.

He had yet to do so as of press time. 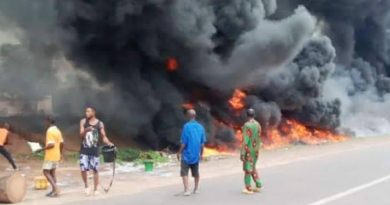